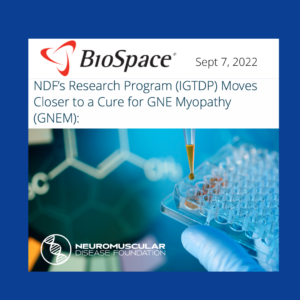 In 2020, The Neuromuscular Disease Foundation (NDF), a Beverly Hills based non-profit in order to advance research to end the muscle wasting disease, began its International Gene Therapy Development Program (IGTDP).

That program is designed to find an effective treatment to halt the progression of GNEM and is the culmination of more than a decade of NDF’s funding of global scientific research into GNEM and treatment options. In 2021, the organization promptly enlisted a world-renowned team of researchers and scientists, having multiple areas of expertise, to collaborate in this initiative and to leverage the accumulated data from their global research efforts.

The objective of the NDF led team’s research is to treat patients who have a confirmed diagnosis of GNEM, by slowing the progression of the disease. If successful, NDF’s effort will be a historic milestone in the gene therapy field, and could serve as a blueprint for other institutions to take similar approaches in developing gene therapy treatments for patients with other diseases.

NDF’s board of directors worked with the team of leading scientists during the winter of 2021 to determine how to best reach the goal of developing the proposed pre-IND package and secure future IND approval from the FDA.

In late 2021, the team began producing the viral vector containing the GNE gene, looking forward to finalizing the proof-of-concept preclinical studies. They then progressed ed to the pre-clinical development testing phase, testing the gene therapy and In mouse models identified a lead drug candidate for development and further trials
. .
Over the past twelve months:

Having seen auspicious progress thus far, the organization is continuing full steam ahead with its ambitious plan to deliver a viable treatment that will halt the progression of GNEM in affected patients, in a nearly unprecedented timeframe. The NDF’s donor community continues to sustain this NDF sponsored science, to facilitate these measurable steps toward delivering a cure to GNEM patients worldwide.

At the time of this writing, the NDF scientific budget for 2023 is $1 million, with leadership seeking to grow that amount through the involvement of interested corporate partners and private donorship.

Recently, it was announced that Rich Horgan, NDF’s biotechnology consultant, had obtained FDA approval through the company Cure Rare Disease, (of which he is founder and CEO), to administer the first-in-human CRISPR therapeutic for Duchenne muscular dystrophy.

As the global research community watches this trial and the overall future of the therapeutic, NDF anticipates that with Rich Horgan as part of its scientific team it will soon see a similar trial for GNEM therapy.

The Neuromuscular Disease Foundation (NDF) works to enhance the quality of life for those living with GNE Myopathy by funding critical research focused on treatments and a cure through The International Gene Therapy Development Program (IGTDP) and by advocacy, education and outreach. Donations to the NDF benefit research toward a cure as well as an impressive roster of patient programs, including a Holistic Wellness Center that offers counseling services, patient support groups, a multidisciplinary clinic, access to genetic screening, and a learning library of webinars, podcasts and educational resources involving experts from around the globe, to keep the GNEM patient community well apprised of real time developments in the science to treat GNEM, and more. For more information, please visit https://curegnem.org

As published in BioSpace Magazine on September 7, 2022.