On what was labeled an “extraordinary event” by many of the more than 530 enthusiastic attendees, the Neuromuscular Disease Foundation (NDF) hosted its second annual NDF Arts Gala, on Sunday, November 17th, at the Skirball Cultural Center. The Foundation, small in size but extremely formidable in its focus and achievements, is committed to enhancing the quality of the lives of people living with GNE Myopathy (also known as HIBM) through advocacy, education, and the funding of clinical research focused on curative treatments, such as gene therapy. 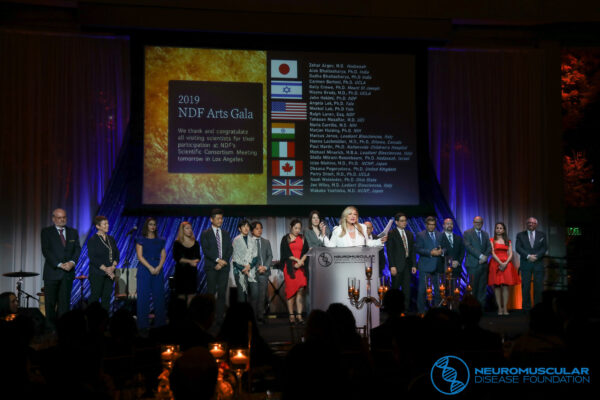 An international consortium of esteemed scientists, all working on a solution to GNE Myopathy, joined NDF CEO, Lale’ Welsh on stage during NDF’s gala to help fund a cure.

Sunday night’s event was certainly an important milestone in its quest to halt a disease that can significantly impair the body’s muscles, according NDF CEO, Lale Welsh. She explained that the Gala was the final and critical step in raising the balance needed for its 2018, $2.5M challenge grant. The astounding total of $5M raised will help fund pre-clinical studies needed for gene therapy.

“To the surprise of many, we have proven that we really are ‘the little engine that could.’ With the help of key stakeholders as well as devoted scientists, we have achieved a fundraising goal thought to be impossible by any nonprofit organization our size. We owe this to the dedication of our patient population and their families, who have risen to this challenge.”

The 2019 community-based Gala featured captivating artists, talented musicians and dedicated honorees who filled the night with “joy and beauty.” The CEO particularly called out Dr. Nuria Carrillo, from the NIH who received the 2019 NDF Scientific Advancement Award for their work on a promising treatment; Oral-N-acetyl-D-Mannosamine (ManNAc), slated to begin Phase 3 soon. This award was also presented to Michael Minarich, the CEO of Leadiant Biosciences, the pharmaceutical company that recently partnered with investigators at the National Human Genome Research Institute (NHGRI) at the NIH, and is committed to providing late stage scientific and financial resources for the proposed treatment.

However, according to Ms. Welsh, the event also marks the start of the next step: the journey towards gene therapy and a proposed partnership next year with a biotech company specializing in genetic muscle disease. “That, too, will not be a simple endeavor, but our team is well-positioned to attack that task as we do our fundraising goals…ferociously. We invite anyone interested in helping advance our mission to visit our website, www.curehibm.org.”

HUDDLEs are virtual, peer-to-peer support and ment
We would like to wish a happy Independence Day to
What is GNE Myopathy? GNE Myopathy is a rare, inh
💙 We celebrate artists living with disabilities
Follow on Instagram