Sure, You’ve Heard About GNEM. But Do You Know About the Bulgarian Variant? 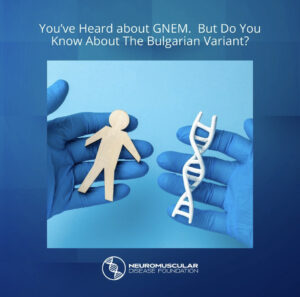 GNEM, which is classified as a rare disease, is also what is referred to as a “late onset” disorder, because it often first presents in patients who are 20 to 40 years old.

“GNE myopathy results from variants in a gene called GNE (UDP-N-acetylglucosamine 2-epimerase / N-mannosamine kinase). Mutations can form in this gene, causing the symptoms that are recognised as GNE myopathy. These variants of the gene are responsible for a step in the production of a sugar called sialic acid. The diagnosis may be suggested by the presence of red-rimmed vacuoles (inclusions) in muscle biopsy tissue. Identification of GNE gene disease-causing variants by DNA sequencing can confirm the diagnosis.” (The National Human Genome Research Institute)

How many mutations or variants are there?

GNEM has been around for a very long time. While its earliest presentation may not be medically known, the recessively inherited disease has existed long enough to have evolved not only through multiple names, but the uniquely hard-to-diagnose myopathy has also been found “in various regions of the world with more than [255] disease-causing mutations already identified. Several of those are proven or suspected to be founder mutations in certain regional clusters.” (Europe PMC)

A “founder mutation” is “[a] genetic alteration observed with high frequency in a group that is or was geographically or culturally isolated, in which one or more of the ancestors was a carrier of the altered gene. This phenomenon is often called a founder effect,” and is also called a founder variant. (cancer.gov)

GNEM is a global disease

Often, scientific research will uncover that a condition’s origin is limited to a single closed society or, at most, a few regions within a single continent. This is not the case with GNEM, which is definitively a global muscular disease, having first been reported in the Middle East and then studied in Japan.

“The world-wide distribution of GNE myopathy… is unusual because in one large region of the world only a single homozygous mutation leads to the disease in the vast majority of patients while in other parts of the globe the variability of the mutations is very high.” (Europe PMC) At present, over 255 GNE variants are known. (National Library of Medicine)

The first reported cases of GNE myopathy emerged in a cluster of patients who originated from Iran. This is the cluster that is most often affiliated with GNEM, a group of patients of Persian Jewish descent.

However, there is a lesser-discussed, and more mysterious variant of GNEM, p.I618T, which presented in a Roma / Gypsy cluster exclusive to Bulgaria. A great deal is known about the genetic basis of GNE myopathy, thanks to the identification of the defective gene involved in the Bulgarian variant, UDP-N-acetylglucosamine 2-epimerase/N-acetylmannosamine kinase, or GNE [2]. This is the gene that mutates to cause recessive GNEM. (Europe PMC)

The Bulgarian variant is among the top three founder variants of the disease. While “there is no detailed report of this cluster”, the approximately 50 patients who were diagnosed, are all “probably homozygous for this mutation, and all are of Roma/Gypsy origin. Most of their clinical features are within the common range of GNE myopathy phenotype but there may be few unusual features in this cluster” (e.g., onset of the disease first presenting in the hands, as opposed to foot drop, the indicator prevalent to most variants). “It seems not surprising that such a socially isolated community will harbor a recessive mutation that will be the founder of a cluster. In fact, only in recent years has the Gypsy community of Bulgaria been recognized as a ‘founder community’, and few other neuromuscular disorders founder mutations have been identified in it.”

What conclusions can be drawn from the discovery of the Bulgarian variant?

For decades, GNEM has existed as an under-recognized global disease. Reports of the disease have disproportionately reflected the earliest-known cluster, patients of Jewish Persian Middle Eastern descent. However, the Bulgarian variant presents the possibility that there could be additional founder variants, and especially coming from regions that are well isolated. This second cluster is speculated to have descended from India and migrated to Eastern Europe. For the already somewhat complex disorder, the Bulgarian variant (UDP-N-acetylglucosamine 2-epimerase/N-acetylmannosamine kinase, or GNE [2]) also indicates the possibility of additional, if not multiple, early indicators or symptoms, such as hand mobility and/or foot drop, which once identified, can be used to diagnose GNEM in patients.

Further research into the Bulgarian mutation that can present via distal weakness in the hands and is most prevalent in present day Eastern European countries, will inform continued and advanced methods of diagnosis, screening, and possibly effective treatments.

For more information about GNE myopathy, its causes and symptoms, visit the Neuromuscular Disease Foundation website: