Published On: January 14, 2022Categories: Patients in the News8.7 min read

Imagine living in a culture where the stigma of having a physical disorder were still very much present. Or where society lacks empathy and the right infrastructure towards persons with disabilities. 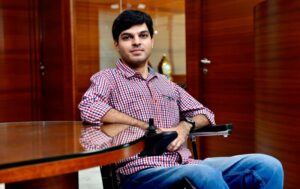 This is a difficulty that 33-year-old entrepreneur and financial advisor Rushabh Desai faces on a regular basis where he grew up and lives, in India.

There are thousands of rare and/or “orphan diseases” around the globe. And the patients who learn to live with these conditions, have to learn a heightened level of resilience early on. One such condition, GNE Myopathy (GNEM), a disorder that causes the progressive deterioration of muscle tissue, poses many hurdles just during its early detection and diagnosis stage.

For decades, very little was known about GNEM. Like Muscular Dystrophy, the condition relegated its patients to a drawn-out experience of slow paralysis, later confining them to wheelchairs during its advanced stage. But GNEM had its own unique markers, such as the now recognized early symptom of “foot drop,” or difficulty lifting one’s foot, that made the disease confusing and complex to diagnose, for doctors who’d never heard of it, or were unfamiliar. The disease was often confused with Muscular Dystrophy, which presents with similar problems.

Today, a handful of organizations have worked to make the patient journey toward diagnosis and finding support a more user-friendly process. Among these  groups, NDF (the Neuromuscular Disease Foundation) stands out in Rushabh’s mind for the progress it has catalyzed in the areas of clinical research toward curative gene therapy treatments to end GNEM, and cultivating virtually accessible patient support programs. “There is no doubt NDF is doing and has done an extraordinary job in the areas of scientific collaborations, gene therapy, NIH funding and other patient programs globally, which only a handful of organizations have been able to do so far, Rushabh says”. “I would like to deeply thank NDF for the opportunity given to me to share my story, and for all the work NDF is doing for all GNEM patients like me out there. I express my sincere appreciation for the wonderful work they have been doing”.

Rushabh Desai’s first symptoms appeared in his late teens. Growing up an active and athletic child who loved to participate in sports like swimming and bodybuilding, he never could have dreamt that he might someday be wheelchair bound.

During his early University years, he worked while maintaining a full-time class schedule. He says that mild symptoms would pop up, but as he was engrossed in college and work, he never gave them any thought. Then at age 20, he joined his friends for a picnic, and suddenly realized that he was having difficulty running while playing sports with them. This was when he realized that something was wrong. Soon thereafter, his mother observed him limping, and took him to their doctor. However, the many doctor visits to follow provided no relief. Rushabh and his family understood there was something wrong, but the doctors couldn’t put a name to what he was experiencing.

It would be several muscle biopsies, countless tests, one faulty diagnosis, and a trip to the Institute of Myology in Paris (France) later, that Rushabh received his confirmed diagnosis of GNE Myopathy, more commonly referred to as GNEM.

Today, Rushabh says that there isn’t a moment of his day that his physical disorder does not impact his life in some way, as he tries to explain what it’s like for a GNEM patient to maintain a normal daily routine. “GNEM impacts practically every day in every aspect, whether personally or professionally. Because right from the moment you wake up, the challenge starts. Simple movements demand ten to twenty times or more effort than they would require for a regular person. So right from going to the loo, brushing your teeth and combing your hair getting yourself ready for work, and sitting at a desk, you’re putting in immensely more effort to do your daily activities. So of course, the challenge is definitely there,” he says.

Rushabh is a deep thinker, with a practical approach to life. He decided for himself that it was best for him to focus on what he could do, over what he could not. But when he gets to thinking of the evolving nature of his disorder, he touches on what perhaps makes this rare disease so challenging for its patients.

“Even though at face value, I have accepted [my GNEM], probably in the back of my mind I still haven’t accepted it. Because GNEM keeps reminding you of all the challenges you face on a day-to-day basis. Also, it’s very difficult to fully accept the situation, because your situation is constantly changing, since this is a slowly progressive disease. It’s very difficult to adapt to this on a regular basis, but yes, I’ve accepted it”.

Fortunately for Rushabh, he knows better than to subscribe to false beliefs. “See, I didn’t ask for this, this was nature’s call, you could say. This is a hereditary genetic disorder that was sleeping in my body for so many years, and just became active after a certain age”.

But even with all of Rushabh’s intelligence, capability, and privileges – having grown up a member of a Business-oriented family – he’s still acutely aware of the various types of difficulties that GNEM patients must overcome. “You can’t just sit and cry over it, you know, at some point you have to move on in life,” he says, emphasizing the importance of honesty and practicality in communicating about his disorder to the public, and to other patients.

During the earlier stages of his condition, Rushabh worked at a Finance company in India, where he says that he would sit and work for long hours at a stretch. This is something that he has had to adjust, as his GNEM has progressed. “You get tired very quickly, and you need to take breaks. I don’t prefer to work all at one stretch; I like to divide my work schedule to take a break or two in between.”

Luckily for Rushabh, his condition coincided with something else: an interest in starting his own company.

“I had always wanted to do something of my own,” he remembers. “I come from a business-oriented family, but I’ve never gotten things easy in life. I’ve had to work hard and have had to prove myself on every level. Eventually I did start my own entrepreneurial journey and this would not have been possible without the support and encouragement by my fellow GNEM patient and friend Dr. Shilpi Bhattacharya. I’ve always enjoyed working as well, because working in a company teaches you discipline, how to respect others and respect money. It brings you experience and humility. So, I guess my entrepreneurial journey happened at the right time for me.”

It appears that Rushabh’s practicality and down to earth personality have kept him very level headed throughout his journey with GNEM. But this patient-entrepreneur swears by what he calls the three types of support that he believes every patient needs to thrive and effectively manage their GNEM from diagnosis through treatment:

Rushabh says that patients need all 3 of these supports, to have their needs properly met.

When it comes to personal advice for GNEM patients, Rushabh is a valuable treasure trove of wisdom. He doesn’t mince words, and he keeps it real. “If you don’t help yourself,” he says, “no one will help you. Once you get diagnosed, there’s no cure. Your family can only help you to some extent. Most effort, you will have to take on as a patient, to come out of the shock, or to reach a level of acceptance. You need to prioritize taking care of your own health, taking care of your career. For me, I had to struggle and it took time. Also Unfortunately, during the course of this disorder I didn’t get the kind of understanding and support I wanted from certain family members towards my challenges, feelings and needs pertaining to my disorder. I had to struggle here as well,” he explains matter-of-factly.

Rushabh describes his taking ownership of his life not in a negative way, but rather, as someone who has become empowered through the realization that his life, his happiness and even his success, all depend on him.

Perhaps most significantly, he says that he would tell other GNEM patients “When you take charge of your own life, and become financially and emotionally independent, you will realize the new set of wings you’ve added to your life, and the world will start respecting you. Because the world is a very cynical place. Whether you like it or not.”

Rushabh pauses to explain that his main interest in talking about his GNEM is that “I don’t want anyone else to go through the same ordeal, the same process that I went through. My focus is so that people can be aware from the start, and be cautious, and make the right decisions in life. I feel life is not easy, whether for a normal person or a disabled person. You don’t have to explain things brutally, but balancing your emotions and practicality is very important in life I  think”.

What comes through most clearly in speaking with Rushabh, is that he genuinely wants to be as honest as possible about the nature of the patient’s experience with GNEM. He is not interested in sugar coating his experience; he wants other patients to go into their journey with eyes wide open.